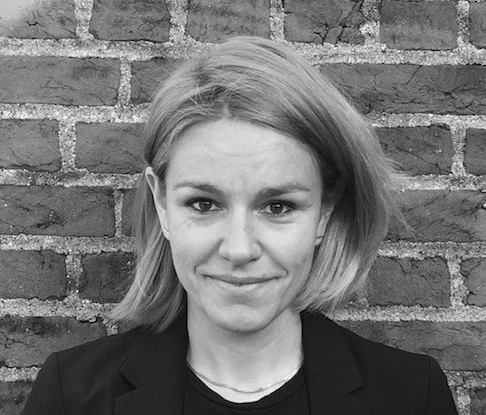 An ongoing series on current and recent Berkeley grads working on religion.

As part of our series spotlighting UC Berkeley graduate student research, BCSR recently had the opportunity to sit down with Simone Stirner, a doctoral candidate in Comparative Literature with designated emphases in Critical Theory and Jewish Studies. Her dissertation, tentatively titled “Counterrhythms: Concentrationary Memory and the Ethics of Attentive Reading,” examines the poetic strategies by which writers negotiate and challenge how readers pay attention to texts and to the world after the historical crisis of the Nazi genocide.

BCSR: Could you tell us about your dissertation and what you see as the big-picture significance of your research?

My dissertation focuses on what I consider to be a “poetics of attentiveness” in three authors: the Romanian-born German-language poet Paul Celan, the Romanian-born Hebrew-language poet Dan Pagis, and Charlotte Delbo, a French author and member of the French resistance. All of them are survivors of the Nazi concentration camps—an experience that profoundly impacts their writing. They confront readers with difficult, traumatic memories but also formally disturb and challenge the way we read, troubling our habits of perception, of looking, listening, understanding. More than trying to represent the past, these three authors test the formal capacities of poetic language to unsettle our ways of attending not only to a text but to the world, creating a susceptibility toward the past in the very present of reading.

A lot has been written on Celan and there is an increasing amount of really interesting work on Delbo and Pagis. My approach differs from existing research because I shift away from a certain kind of critical engagement that takes these difficult texts primarily as signifiers, debating what they mean and—if meaning is withdrawn—reading the failure of signification as a sign for the historical crisis. My project focuses more on the phenomenology of reading and considers the stakes of a writing that has us read over and over, that confronts us with silences, or deeply disorients a reader. So for instance, a text that is heavily fragmented can be seen as visually echoing the crisis of the Shoa. But it also formally draws our attention to the ways in which we pay attention. The text challenges our perception and in this way, it affects the present of reading just as much as it speaks of the past.

Attention is of course not uniform; it’s a complex and difficult topic—particularly in the context of the texts I engage with. The system that enabled the concentration camps—what David Rousset called the “concentrationary universe”—is itself reliant on a regime of vigilant attention, a violent logic of ordering and organizing the world that ultimately found its most disastrous expression in the catastrophe of the Nazi genocide. I see the poems and prose pieces by Celan, Pagis, and Delbo not only as testimonies to the concentrationary universe but as a counterforce; reading them is an exercise in attending to the world differently, of unlearning habits of seeing and relating to the world in a way that can open a reader up to otherness. 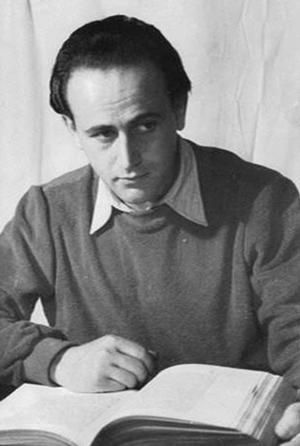 BCSR: Could you tell us more about this aspect of your work on Celan? How do you incorporate methodologies and hermeneutics from religious studies into a project that is more literary and philosophical in its scope?

There has been quite a large amount of work on the “religious dimensions” of Celan’s work—in fact, I remember my first undergraduate class dealing with Celan (pictured, right) was a class titled “The Bible in Literature.” His writing—not unlike that of Hebrew author Dan Pagis—is in dialogue with a range of religious traditions. In Celan, there are references to German mysticism (in particular the writings of Meister Eckhart), biblical themes, direct quotations from the Psalms, prayers, sometimes subversions thereof. I want to add to this emphasis on religious subjects in Celan by showing that the practice of reading that his poetry invites resonates itself with religious practices. As I would argue, Celan’s poetry enlists the ethical, communicative, relational and mnemonic force of a particular mode of attentiveness that is most prominently associated with Jewish traditions of prayer. To provide just one example: In 1960, Celan gave a speech that later would become famous under the name “The Meridian.” In this speech that is often considered a poetological statement, Celan speaks of poetry in curious terms. He states that the poem is “under way,” that it “is direction,” that it is attentive to all that it encounters, and that it bears a “concentration mindful of its dates.” A lot has been written on this. What is interesting to me is that the figures that Celan uses have a strong resonance with the way in which Celan’s interlocutors (such as Walter Benjamin and Gershom Scholem) describe the notion of Kavana, that is, the attentiveness particular to Jewish traditions of prayer. It seems to me that he is almost inflecting the valences of this term onto his thinking about what poetry is and can do. Reading Celan alongside this tradition allows us to get a new perspective on the way we read Celan, and the import his poetry has on the present. Remembrance, in this tradition, is not only a turn toward the past but an active reconfiguration of the present.

So yes, religion is an important ethical and hermeneutic framework for Celan. The question is always, what to do with this dimension of his poetry? Sometimes, these religious elements are taken together and turned into a narrative that is supposed to proof Celan’s hidden piety. But then there are also all the elements in his writings that are quite blasphemous, especially in his later work that problematizes these readings. Celan’s relation to religion and particularly Judaism might be complex and conflicted, but religion is an important point of reference.

BCSR: How did you come to this particular topic and did broader political or social concerns play a role in shaping your research?

My approach to this topic is definitely influenced by growing up with a particular German “culture of remembrance,” “Erinnerungskultur.” Under the dictum of “Never again,” Germany built memorials, politicians put down flowers in Yad Vashem, and Celan’s poem “Death Fugue” is taught as a testimony to the holocaust in high school. The imperative to remember the Nazi Genocide was written into the public consciousness of a “new” Germany after the war. But who got to write this narrative of the new Germany? As German poet May Ayim writes after the reunification: Germany “celebrates itself / without its immigrants refugees Jewish and black people,” echoing a sentiment that Celan shared. Celan was acutely aware of the persistence of anti-Semitism in Germany and while his poems were recited, his warnings were not heeded; they were discarded as paranoia. Now it’s 2018 and you see right-wing groups mobilizing the masses, marching in the streets of Germany, going after people who look differently, and very consciously using the language and symbols of the particular kind of German fascism that is captured in the chiffre of Auschwitz. So maybe this Germany hasn’t paid enough attention to what is happening in the present, to the ways in which the “concentrationary universe” continued to exist even as the concentration camps were liberated. Reading Celan in 2018 I think is also an understanding that these texts do not only talk about the past, his poetry is not only a story of the Holocaust. It is a practice of reading and relating to the world otherwise, of carrying the memory of the past in a way that has it actively speak to the present. This might be a very large and possibly idealizing claim, that in reading literature we might not only read the text but our contemporary reality, that it might challenge us to unlearn habitual ways of seeing while reading a poem, and that this moment of unlearning might transpire into our ways of seeing the world at large. But I think it is a claim that Celan’s poetry as well as the work of Pagis and Delbo do put forth. 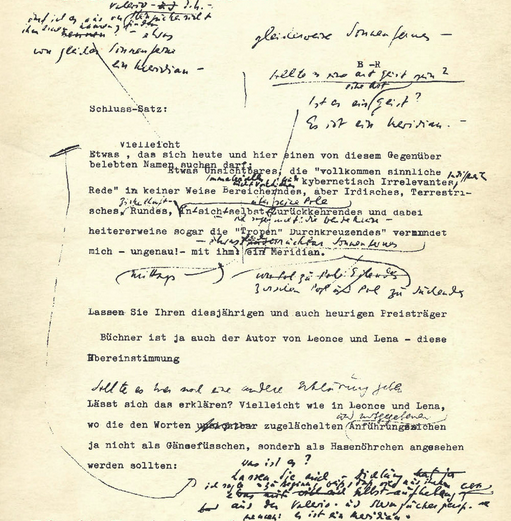 An excerpt from the drafts of Paul Celan’s “Meridian” speech given at the acceptance of the Georg Büchner Prize in 1960.

BCSR: How did the work of BCSR faculty inspire or help with your research?

Among the BCSR faculty, I’ve benefitted greatly from Niklaus Largier’s mentorship. His work and teaching on aesthetic experience and religious practices inspired this project before it was one. And then obviously David Marno’s work on “holy attention” is a great inspiration. His study deals with a different set of texts and problems, but his conceptual approach to attentiveness at the intersection of religious practice, philosophy, and hermeneutics is very helpful as I try to understand this nexus in the poetics of Celan. I have been part of Niklaus Largier’s and David Marno’s reading group on “Prayer” since my second year in grad school. My incentive to join the group was that we would get to Celan by the end of the semester. Four years later, we are still somewhere in the middle ages but on the way I’ve learned a great deal about the sources and traditions that Celan himself read. I’m also associated with the Center for Jewish Studies, a number of whose members are affiliated with the BCSR and have influenced my thinking.

BCSR: What are your future research plans?

This is the last academic year before going on the job market so all my time goes into working on the dissertation and preparing articles for publication. I’m currently revising a piece on Walter Benjamin’s theory of reading for publication and am finishing a short essay on the Hebrew elements in Celan’s poem “Hüttenfenster” for an edited volume. I also still hope to do something with a series of papers I wrote on different occasions over the last years on the religious dimensions of Kafka’s notebooks. The particular aesthetic of fragmentary and miniature prose—from Silesius through Kafka and Benjamin to Edmond Jabès has been an ongoing interest of mine that has fallen out of focus but I hope to return to this topic sooner or later.

BCSR: Thank you for your time, and best of luck!

The Berkeley Center for the Study of Religion (BCSR) advances creative and critical scholarship on religion in the world. bcsr.berkeley.edu | @ucbreligion